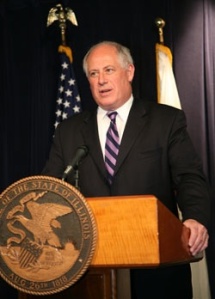 (Chicago, IL) — December 30, 2009. Governor Pat Quinn yesterday announced an overhaul of the Illinois Department of Corrections’ prisoner early release program to undo the political damage that the early release of 1,718 inmates—which included violent prisoners and repeat drunk drivers–who served, on average, 37 days but some as little as 11 days, had done to his administration.

“An overhaul of the Department of Corrections’ statutory program guarantees my commitment to safety while also making adjustments needed to improve the program’s operations,” said Quinn.

Quinn’s opponent in the Illinois 2010 Democratic primary for governor, Comptroller Dan Hynes was having none of it.

Hynes’ spokesman Matt McGrath, recognizing the fiasco for what it has been, said in a statement:

“It took Pat Quinn two weeks and two ‘top-to-bottom’ reviews to settle on a scapegoat and realize what should be common sense: that a secret early release program for violent offenders is a horrible idea that needlessly threatens public safety.

Meanwhile, the fact that at least 12 of those inmates have returned to jail for committing violent crimes is as predictable as it is infuriating. Pat Quinn’s lame acknowledgment today that mistakes were made — by others, naturally — is totally inadequate, and this whole sorry affair is an outrageous violation of trust.”

Quinn’s overhaul—which includes the traditional closing of the barn doors long after the horses have galloped away—addresses the following policy areas:

While the 61-day custody requirement had been a long-standing practice within the Department of Corrections, it is not a formal law or agency rule and was reduced by the Department of Corrections in September 2009.  In order to ensure that an offender serves at least that amount of time in State custody before being credited with any meritorious credit, the 61-day requirement has been reinstated as a formal agency rule.

Enhancing Communication with Local Authorities. The Department of Corrections will now provide local prosecutors with at least 14-days advance notice before releasing an inmate into mandatory supervision under the meritorious credit program or into home custody under the separate Electronic Detention Program.

Improve the Law. Quinn pledges to work with members of the General Assembly to develop initiatives that will prohibit dangerous criminals from being eligible for meritorious credit program. Presently, Illinois law dictates that those convicted of certain crimes against persons and DUIs must be included in a meritorious credit program, along with those convicted of lesser offenses.

Bolster IDOC Operations. Quinn will soon name a Chief Public Safety Officer at IDOC, who will be responsible for overseeing implementation of the meritorious credit and Electronic Detention programs. In addition, Quinn will name a Public Safety Liaison Officer for the Office of the Governor, who will also assist in the oversight, coordination and implementation of those programs. This position will work within the Office of Governor’s General Counsel.

In addition to all the post-barn door closing steps, Quinn has appointed retired Judge Gino L. DiVito to the Sentencing Policy Advisory Council. The Council, part of the Crime Reduction Act signed into law in August, will review sentencing policies and practices and examine their impact on the Illinois criminal justice system.

The Council is composed of 18 members and is required to submit an annual report to the Governor and the General Assembly.

Both a shelf and the dust are being readied for the report.

A review ordered earlier by Quinn and headed by former Judge David Erickson has found that under the early release program:

In Illinois the rate of recidivism, a tendency to relapse into criminal behavior, was 51.3 percent in fiscal year 2009 and 47 percent of DOC inmates serve six months or less.

Erickson, a Senior Lecturer in Law at Chicago-Kent College of Law, is a former judge and prosecutor and an unpaid advisor to the Governor, is conducting a top-to-bottom review of the meritorious credit program along with Jerome Stermer,  Quinn’s chief of staff, and Theodore Chung, general counsel to Quinn.

Remember to double-bolt and stay off the roads tonight.