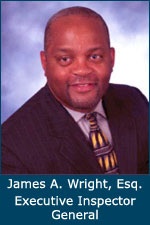 (Chicago, IL) — August 25, 2010. Ex-Illinois Executive Inspector General James Wright has left Governor Pat Quinn another parting gift–his monthly report for August–his last–reveals that his office received more ethics violation allegations from agencies under the Governor’s control than in any other report during 2010.

In August, Wright’s August report says the office received 167 allegations of ethical misconduct, 54.6% higher than the 108 reported in January 2010 and 98.8% than the 84 tallied in July. The next highest number was 159 allegations recorded for June. The least was in March, reaching 65.

For the year, there have been 885 allegations made. Write has referred 80 cases so far to law enforcement for criminal investigation.

This lead to a rhetorical blast from Bill Brady‘s campaign manager, Jerry Clarke:

“This is yet another stunning report involving the administration of Governor Pat Quinn.  Today’s revelation suggests that on the very day Pat Quinn was confronted with evidence by the Inspector General of an ethics violation, Pat Quinn put his political interests before citizens yet again and fired the Inspector General himself.  This disturbing report leads to a myriad of questions that the citizens of Illinois deserve to have answered.”

Monthly ethics allegations reported under the state agencies controlled by the Governor in 2010:

Apparently, this is no pattern in the monthly tally of allegation reporting. The figures bounce around. However, in the dog days of summer, more whistles than ever this year are being blown.

Funny thing, of course, is that Stermer blew the whistle–on himself.

And Wright went out with a bang.