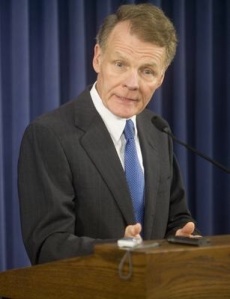 Madigan’s plan, Constitutional Amendment 57, would require that a judicial candidate be a licensed attorney for at least 10 years to become a circuit judge, 12 years for an appellate justice, and 15 years for a Supreme Court justice.

Cross, who is pushing his pet legislative redistricting constitutional amendment, CA 56, as a tool–in the absence of competent election campaigns–to gain majority control of the House, opposes Madigan’s amendment.

“We believe it is a tactic by the Speaker,” said Cross, who sent Madigan a letter seeking to stall the amendment, according to the State Journal-Register‘s Brian Feldt.

Constitutional amendments must be approved by voter referendum on a general election ballot, and there is three-amendment maximum to the ballot.

Cross is worried that his tactic, er, amendment–and his hope of gaining a House majority–will get squeezed off the November ballot by the multitude of competing amendments seeking to elbow themselves into one of the three slots.