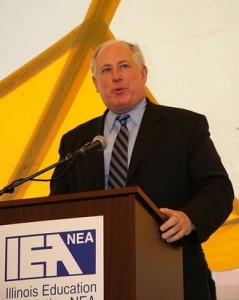 The Board of Directors for the Illinois Education Association, which backed Comptroller Dan Hynes in the Democratic primary over Quinn, voted overwhelmingly to back Quinn and Simon in the general over State Senator Bill Brady (R-Bloomington) and political newcomer Jason Plummer, 27.

“There never has been a more clear-cut choice for governor and lieutenant governor of Illinois.  The Illinois Education Association enthusiastically recommends Governor Pat Quinn and Sheila Simon to our members and to everyone who supports public education,” said IEA President Ken Swanson.

In the governor’s race four years ago, between ex-Governor Rod Blagojevich and ex-Treasurer Judy Baar Topinka, IEA made no recommendation.

In respond to the Quinn endorsement, Brady said: “The union leadership has unfortunately chosen the status quo. Pouring more and more of our tax dollars into the bureaucracy with no plan and no accountability is not the solution for improving education.”

The IEA’s backing is a big boost to Quinn’s campaign.