(Chicago, IL) — October 29, 2010. There are 14 Illinois legislative races that have crossed the $1 million mark in total fund-raising, according to a top campaign finance group.

The million-dollar election campaigns have totaled $19.7 million, and nearly two-thirds of the money came from campaign committees controlled by the state legislative leaders, according to an analysis of candidate contribution reports reviewed by the Illinois Campaign for Political Reform.

In the contest between State Senator Deanna Demuzio (D-Carlinville) and GOP rival Sam McCann, a total of $2,577,300 has been spent. Demuzio has out-spent McCann $1,790,200 to $787,100, making this race the most expensive legislative campaign in Illinois.

In contrast to the 14 million-dollar races this year, only six legislative contests had passed the $1 million mark at this point in the 2008 election.

According to David Morrison, Deputy Director of ICPR, “The high numbers are due in part because there are no limits on the amount that leader committees can funnel to legislative candidates.”

There are 118 House seats and 21 Senate seats on the ballot this year. 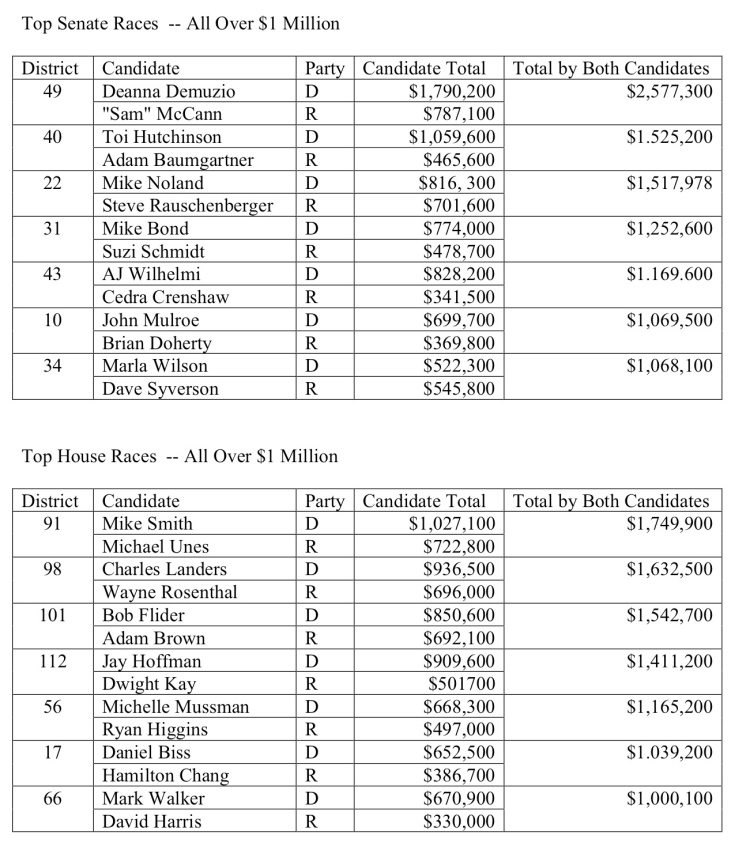 “Because the obvious top priority for both the leader and candidate is to win election, leaders will not lean on members in swing districts to take votes that will hurt the legislator at the next election,” Morrison said.  “Every member knows that a few shifts of the political winds could land them in a hotly contested primary or general election.”

These totals include cash on hand on June 30, plus all reported cash and in-kind contributions from July 1 to the present. However, totals do not include funds from donors who gave $500 or less in the final 30 days before the election, which will be reported in January.