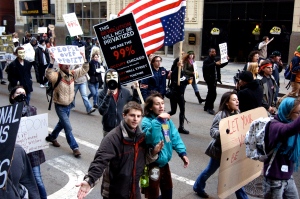 (Chicago, IL) — October 12, 2011. The thinking among Springfield insiders up until a few weeks had been that the legislature was likely to override Governor Pat Quinn’s veto of Commonwealth Edison’s “Smart Grid” bill, a measure that guaranteed the electric giant a rate increase of 6 percentage points over the 30-year Treasury rate to upgrade its power grid.

When a top House Democratic lawmaker was asked a couple weeks ago about the probability of a House override, the response was a terse, “Yes, I do.”

That was before the Occupy Wall Street Movement ignited and metastasized throughout the country, and spawning an Occupy Chicago branch. In 19 days, Occupy Chicago has racked up 11,191 Twitter followers, a Web Site that is drawing nearly 100,000 visits daily, and protests that are sucking up a whole lot of news media coverage.

Then three days ago the Chicago Sun-Times launched a thunderbolt into the ComEd debate.

The paper published a Better Government Association report that revealed that ComEd and Ameren executives and affiliates ladled out $1.3 million to Illinois lawmakers and political campaign arms in the months leading up the legislature’s approval of the “Smart Grid” rate increases.

The Occupy Wall Street protesters and their Chicago cousins are foaming at their collective mouths over the perceived privileged positions and excesses of the nation’s 1%–corporate CEOs, Wall Street bankers, hedge fund wizards, etc.–versus the 99% or everyone else.

The protesters’ criticisms are largely unfocused and their remedies virtually non-existent. But their anger is real. They think politicians are favoring the 1% over the 99% when it comes to solutions to the economic crisis and broader economic issues.

ComEd’s “Smart Grid” bill and its political muscle flexing feed directly into the spirit of the protesters’ complaints. Lawmakers seeking to override Quinn could be hurtling into a political buzz saw.

Quinn is clearly attempting to stir public opinion behind his ComEd veto. The governor was zipping around four Central Illinois cities last week—Marion, Decatur, Belleville and Peoria—beating the drum for public support in behalf of his veto before lawmakers head back to Springfield at the end of October for its veto session.

Quinn has not explicitly linked the Occupy Wall Street, Chicago movements to his campaign to sustain the veto. But the political winds blowing from the protests could inflate Quinn’s sails.

“If Quinn decides to harness the Occupy Wall Street and Chicago protests, such a move could give him an edge over General Assembly in ComEd tug-of-war,” said a long-time Democratic lobbyist. “Latching onto a grass roots protest movement of the down-trodden would be vintage Pat Quinn.”

A political embrace of the protesters is not without risk.

Their camps and marches are disrupting local businesses, snarling traffic, and annoying nearby homeowners in some locales. The police arrests in various cities have conveyed an unruly image of some of the protesters. And their lack of Tea Party-like organization raises questions about their potential political clout.

Nevertheless, with the governor’s public support hovering around a dismal 30%, a political marriage with Occupy Chicago might be a bold stroke by Quinn to goose both the ComEd veto and his flickering political fortunes.

Heck, even a mere flirtation and a little footsie with Occupy Chicago might help.