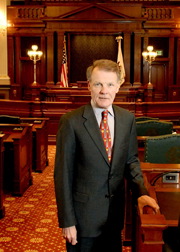 Lang said the task force will focus on targeted legislative job creation initiatives that can be approved by the Illinois General Assembly during its spring 2010 term.

“This task force will act swiftly to identify legislative fixes that will help and encourage Illinois employers to hire new Illinois employees,” said Lang. “There will be no time wasted on unread reports or undoable grand schemes.”

Lang cited state permit regulations that can delay new building and factory openings by several months as a potential target for reform.

“Without compromising employee safety, the task force will aim at obstacles that shackle an employer’s ability to get new employees working quickly,” said Lang.

The task force will begins work in January.

“We have no time to waste,” said Lang.